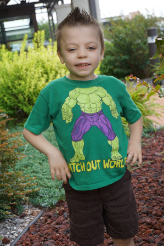 Kane Lamberson received his first of many blood transfusions as a newborn.

We first introduced Circulator readers to Kane Lamberson in our Summer 2011 issue (click HERE for that story). At that time, Kane had not yet received a diagnosis. The family moved out of state for a while, but returned to Springfield and got in touch with us. Let’s catch up with Kane now.

“Within five minutes of Kane’s birth, we thought there was a problem,” Dave Lamberson said of his and wife Liz’s son, born in April 2010. “He was very pale and was hooked up to a ventilator almost immediately.”

Doctors said their newborn would live 12 to 36 hours. “He was a very sick little boy,” Liz said. His spleen and liver were enlarged, and his bilirubin levels spiked higher than a case of jaundice. He had a blueberry muffin rash all over his body —multiple bluish or purplish marks due to a formation of blood cell clusters. “We had no idea what was wrong.”

An exchange transfusion — which removes some of the patient’s blood and replaces it with fresh donor blood — was performed to replace one-quarter of the baby’s blood volume, but the procedure didn’t achieve the results physicians wanted. The next step was another exchange transfusion, this time pumping out all of the baby’s blood and replacing it with donor blood.

Due to the blood in Kane’s body not being his own, doctors weren’t aware of his underlying problem — congenital dyserythropoietic anemia (CDA) type 1 — and he didn’t receive a diagnosis until he was 18 months old.

“Even before he was diagnosed, he was getting blood transfusions,” Liz said. “He spent a week in the hospital at seven weeks old and started his lifelong battle with blood transfusions. At first it was every two weeks, then every three weeks.”

While Kane has undergone countless blood and platelet transfusions, there have been a few periods of time when he hasn’t needed transfusions. Currently, he has been transfusion-free since March 30, 2016. He goes to the St. Jude Affiliate Clinic at Mercy Children’s Hospital in Springfield, Missouri, for lab work at regular intervals. The results of that lab work indicate whether another transfusion, which typically takes about six hours, will be needed.

His parents can tell a difference in Kane following each transfusion. “After he got the blood, his life would come back,” Liz said. “He would be more energetic. When he’s low on blood he’s very lethargic and wants to lay around and nap. He’s really emotional and whiney. I could always pick up on the signs when he needed blood.”

The rare CDA type 1 and a hip disease have resulted in Kane having a small stature for his age and delayed motor skills, but he is a happy, intelligent seven-year-old who plays Minecraft, loves the minions from “Despicable Me,” and wants to be a construction worker when he grows up.

Blood transfusions will always be part of Kane’s life. “He’ll have to be very in tune with his body to know how he’s feeling and get labs,” Liz said. 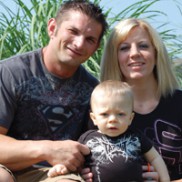 Kane’s parents want people to know that donating blood is important and really does save lives. “It hit me full force after I had him,” Liz said. “His life depended on other people donating.”

If she could meet the many donors whose blood was given to her son, Liz says she would probably cry and express her gratitude. “Without blood donors, he wouldn’t have lived,” she said.

Congenital dyserythropoietic anemia (CDA) type 1 is an inherited blood disorder characterized by moderate to severe anemia. It is usually diagnosed in childhood or adolescence. Many affected individuals have yellowing of the skin and eyes (jaundice) and an enlarged liver and spleen (hepatosplenomegaly). This condition also causes the body to absorb too much iron, which builds up and can damage tissues and organs. Iron overload can lead to an abnormal heart rhythm (arrhythmia), congestive heart failure, diabetes, and chronic liver disease (cirrhosis). Rarely, people with CDA type I are born with skeletal abnormalities.