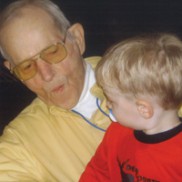 Anyone who knew Duane Richardson would tell you that they were richer for it. “He just loved life,” said Freda Richardson, Duane’s wife of 63 years. “There were so many things he could do. He could fix anything. He was an electrical engineer. He painted, wrote poetry and loved to restore old cars. He mentored at-risk kids. He was a good banjo picker. He had a great sense of humor, He just had to be doing something all the time.”

Before his passing in July of 2010, Richardson regularly received blood transfusions to combat a bone marrow disorder. The nearly thirty transfusions he received at Skaggs Medical Center in Branson gave him the energy to continue to live a rich life for almost two additional years. He used that time to touch others, passing on an infectious spirit that left a lasting impression. “It sustained him,” said Richardson’s daughter Janet Saxon. “And it helped me have a dad for a little longer.”

When a donor gives to Community Blood Center of the Ozarks, you’re helping to give life to the recipient of that precious gift. But when you give blood, you are really giving to more than that one person. “Because the blood made him feel better, it really made life richer for not only him, but for those around him,” Saxon said.

Freda Richardson volunteers as a Blood Drive Coordinator at Ozark Mountain Community Church in Blue Eye. She’s been involved since 2002, but the extra time she was given with her husband has made her more passionate about the cause. “Our doctor told us that were it not for the blood, he would’ve passed a long time ago,” Richardson said. “But it kept him alive. That’s what I tell the church now. These were his friends. They were all affected by that extra time. I’m grateful.”

The next time you roll up your sleeve at a CBCO blood drive, please realize that you’re doing it to save a life. But you’re also doing it to enrich the lives of others. It’s a key distinction, and something else to think about as you give life to your community.

« A night and day difference
Friends for Life »