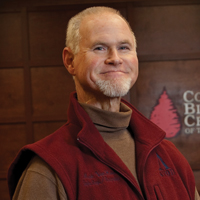 Mark Van Horn of Springfield knows that life runs in a circle.  His journey helped to shape himself and his family in ways that couldn’t be known when that trip began.
When he was in college, Van Horn tried to give blood.  “It was just a horrible experience,” he recalls.  “They had trouble finding my vein.  I ended up with a big bruise and thought to myself that this was something I was not going to try again.”

Several years later, Van Horn was a busy young adult with a family and job.  He had chewed tobacco for about ten years and was worried when a painful spot appeared on his tongue.  A biopsy revealed that the spot was cancerous.  He had surgery to remove the tumor and lymph nodes surrounding the cancer.  The surgery required several blood transfusions
“At that time, the success rate for treatment of oral cancer was around 72 percent, Van Horn said.  “I think I spent more time thinking about the other twenty-eight percent that didn’t have such a positive outcome.  I was married.  I had two young daughters, a mortgage.  It was difficult to focus on the positive.  I was scared.”

A year and a half later, the cancer returned, this time in the form of a golf ball sized cyst beneath his chin.  Another surgery followed, with more blood transfusions.  Statistically, his chances of survival after the second cancer dropped to only 35 percent.  But Van Horn did survive, thanks to skilled medical care, faith and the support of his family.

Fast forward 15 years.  Now a cancer survivor, Van Horn turned his car in to a CBCO Donor Center on a whim in 2004.  “I thought, well, someone helped me, so why don’t I try this one more time.  I came in, registered and whiz bang, everything went very well.  It turns out that I’m actually pretty good at giving blood, and I do it now every chance I get.”
Mark Van Horn has given 33 donations since then.  “Just about every time you call, I’ll come out.  I really enjoy it now.”

Mark also encouraged his daughter a few years back to give at a local high school drive.  Courtney Van Horn not only gave blood that day, but later went to work for CBCO as a mobile donor specialist, helping area donors to help others.  “Talk about coming full circle,”  Mark said.  “I’m very proud of her.”

Mark Van Horn sums up blood donation quite simply.  “If it doesn’t hurt you and doesn’t cost you anything, why wouldn’t you help someone if you could?  It’s easy, simple and means a lot.  Actually, more than you would ever know.”

« Transformed in an instant
Not Every Day Is Promised »