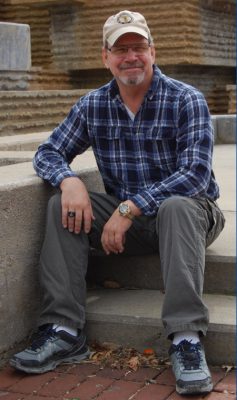 As an over-the-road truck driver, staying on schedule is vital for Teddy Fleck of Springfield, Missouri. A normal work week might cover about 2,800 miles of interstates and highways as he makes sure loads are delivered where they need to be on time. “The majority of products we consume end up on the store shelves thanks to the trucking industry,” he said.

That sense of responsibility and work ethic led him to set his discomfort aside one night about five years ago as he had driven to eastern Kansas to pick up a load and bring it back to Springfield. “I was getting flu-like symptoms and I felt weak,” he said. A trip to the restroom with an upset stomach turned into a warning sign when the toilet was full of blood.

The Army veteran was determined to make the two-hour drive back to Springfield to complete the job. He made it, but by morning he was so weak that he could barely walk. He asked his grandson to call an ambulance.

“When the ambulance picked me up, one of them said I was white as a sheet from losing all of that blood,” Teddy said. He was taken to the emergency room of Mercy Hospital in Springfield, one of more than 40 local hospitals that rely solely on CBCO for blood and blood products. An endoscopy was performed, which is a non-surgical procedure using a flexible tube with a light and camera at its tip to look inside the upper digestive system. The diagnosis? Bleeding ulcers.

According to WebMD, an ulcer is a sore that is slow to heal or keeps returning. About one out of every 10 Americans will suffer from the burning, gnawing abdominal pain of a stomach ulcer within their lifetime. If something throws off the amount of stomach acid needed to break down your food, the acid can eat away at its lining and cause an ulcer. Stress and spicy foods were once considered to cause ulcers. However, ulcers are now known to most often be caused by two things – a common gut bacteria known as Helicobacter pylori and long-term use of non-steroidal anti-inflammatory drugs (NSAIDs) such as aspirin or Advil.

Doctors taking care of him during this event felt the daily aspirin therapy prescribed by his personal physician was the culprit, Teddy said.

“The next morning, they went in and cauterized the ulcers so they wouldn’t bleed,” he said. “By that evening, my system wasn’t replenishing fast enough so they gave me two units of blood.” 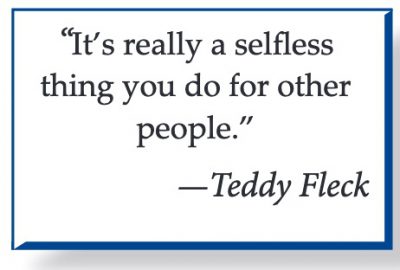 He was impressed with the attention to detail displayed by hospital staff while preparing for his transfusion. “They triple-checked everything. Two nurses read off the units of blood to make sure I got the right blood. They were confirming everything before they actually started putting blood in me.”

Spending about five days in the hospital and then a few days resting at home before returning to work was a challenge for someone as active as Teddy. When he isn’t at work, he can be found volunteering with fraternal organizations. As a member of Springfield’s Elks Lodge 409, the Shriners, and the American Legion, Teddy makes it a priority to participate in the groups’ events and motorcycle rides raising awareness and funds for the different charities they support. “I enjoy the camaraderie, giving back, and seeing the difference these organizations make in our community,” he said. Soon he felt stronger and returned to his normal schedule.

Teddy, who spent 12 years in the military, made donating blood a habit until he was no longer able. “I admire people who give blood. I can’t donate blood now because of being stationed in Europe in the Army in the 1980s,” he said, referring to the FDA’s ban on blood donors who have lived in Europe during specific times, due to the risk of Mad Cow Disease (click https://bit.ly/2BX72zp for more information).

Now with 30 years in the industry under his belt, Teddy has had no other experiences on the road like the night he felt those flu-like symptoms, and he hasn’t needed additional units of blood. He wants to make sure CBCO’s blood donors know how much patients appreciate their generosity. “Thank you for donating,” he said. “I wish I could still donate. It’s really a selfless thing you do for other people.”

FAST FACTS ON ULCERS
Symptoms of an ulcer include:
• Burning upper abdominal pain, particularly between meals, early in the morning, or after drinking orange juice, coffee, or alcohol, or taking aspirin; discomfort is usually relieved after taking antacids• Tarry, black, or bloody stools
• Bloating
• Heartburn
• Nausea or vomiting
• Early feeling of fullness
Symptoms that require immediate medical help include:
• Anemia, such as dizziness, weakness, fatigue, and a pale complexion; your ulcer may be bleeding.
• You have symptoms of an ulcer and develop severe back pain; your ulcer may be perforating the stomach wall.
• You have symptoms of an ulcer and vomit blood or material that looks like coffee grounds, or you pass dark red, bloody, or black stools, or stools that resemble currant jelly; you may be bleeding internally. Call 911 immediately.
• You have an ulcer and become cold and clammy, and feel faint or actually do faint; you could be in shock from massive blood loss. Call 911 immediately.
Source: WebMD