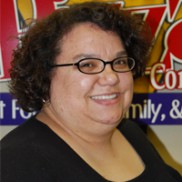 There is nothing more beautiful than watching a child without a care in the world as she plays.  Little eight-year-old Liz was coming off of the playground from recess.  She was running.  Liz loved to run.  Everyone told her she was fast.  At the base of the stairs leading to her classroom doors, there was a misstep.  Then a fall.  Liz’s midsection hit the sharp corner of the stairs with some force.

She had fallen many times before, but this time it was different.  It hurt so bad.  The next few hours are a blur as Liz slipped in and out of consciousness.  Her family was summoned.  They rush her to the hospital.  Just a few hours later, surgery is performed.  A badly ruptured spleen has caused massive internal bleeding.  Friends of the family line up to donate blood on her behalf.

Little Liz would need a lot of blood.  One unit becomes five, then ten.  How much blood could a little girl need?  Several hours later, the surgery was complete.  Little Liz would make a full recovery, after receiving expert surgical care and around twelve units of blood.

The Liz in this story is Liz Wood, office manager of Incredible Pizza in Springfield and a volunteer coordinator for CBCO blood drives.  When the opportunity arose for Liz to hold drives, she jumped at the chance.  “Being a recipient, you really want to help because you know what it’s like,” she said.  “My recollection of the events were that I really was never scared.  I thought about all the kid type stuff.  When will I get to play again?  When could I go back to school?  It’s really amazing when you consider that I received more blood than my body could hold.”

Liz decided that the best way she could repay the kindness showed to her was to try to hold the best blood drive she could.  She obtained some extra incentive items for donors at her drives.  The overhead speaker system announced the drive every fifteen minutes.  Several of her fellow employees shifted their schedules so they could give.  She told those that were a little afraid of the needle that it didn’t hurt.  She told them that she knew what it was like to receive that incredible gift.  “You never know when you’ll need it,” she said.  “You could be in a car accident, or simply running on a playground.  Things happen every day and it’s important to have blood there when it’s needed.”

Liz admits that she really never thought about the people that donated for her.  Partly because of her age at the time.  Later in life, though, she did have the chance to think about how fortunate she was to have blood available when she needed it.  “I realize that I’ll never be able to thank the people that gave for me.  I can never repay them for that act of kindness.  So I’ll do my best to make sure that blood is there for others.  It’s the least I can do.”

« The Act Of Giving Gives Back
The Ten Minute Turnaround »