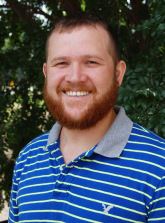 Kyle Skerjanec remembers all of it. He had just left his mother’s house and was turning his motorcycle right on a county road near War Eagle, Arkansas. He remembers losing control of the bike and laying it down. As he and the cycle skidded across the road, the next three seconds seemed like they slowed down to a crawl.

Contact. The truck skidded, rolling over Skerjanec’s legs and torso, shattering his femur and fracturing his tibia. His shoulder was hit hard, with his collarbone, humerus and scapula all breaking apart. He was knocked unconscious for about five minutes and then awoke “feeling like he’d been beaten with a baseball bat over and over.”

He also awoke to find his father, a firefighter, one of the first to arrive on the scene. Kyle’s mother, a volunteer firefighter, heard her scanner dispatch moments after he left her house. She arrived minutes after the crash as well.

Skerjanec remained conscious during the trip to the hospital. He remembers that first blood transfusion. And the next. “That first day, I used twenty units of blood,” he said. “I was losing blood as quickly as they were putting it in. I’m an A positive blood type with a rare antibody, so I needed special attention.”

Kyle would be in ICU for 14 days, and would remain in the hospital for a total of 88 days. He had five surgeries in the first five weeks and 14 surgeries in all. He received units of red cells, platelets and plasma during some of them.

During a long, slow and difficult recovery period that lasted several years, Kyle Skerjanec relied on the support of family and friends. His son and family gave him the strength to carry on through the toughest times. Skilled medical personnel helped to rebuild him. Very slowly he passed milestones, from wheelchair to braces to walking freely. Kyle also relied on blood donors, receiving blood a total of 87 times. 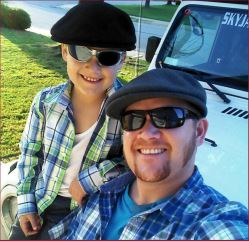 Kyle Skerjanec and his son Landon put on their “cool shades” for this photo. Kyle found strength thinking about Landon when he was injured in a motorcycle wreck in 2011.

Today, Kyle’s health is pretty good considering all he’s been through. He still has some numbness in his right foot, but he can walk without aid. He’s in school, thinking about teaching or, perhaps, a career in physical therapy. He enjoys throwing the frisbee around and likes going to the movies. But what he really enjoys is being with his son. “He’s so smart. He plays all kinds of sports. He’s just a very happy kid.”

One day at Northwest Arkansas Community College, Kyle happened to see a CBCO blood drive taking place on campus. He had given once before, but decided that he should do it again “to give some of what I used back.” He donates as often as he can because it makes him feel good to help people, just as others helped him. “If I could meet the donors that gave for me, I’d probably cry. I’d tell them that, even though I had no connection to you at the time, you saved my life. I’m indebted to you forever. Thank you.”

« So much to be thankful for
Brandon’s Story »