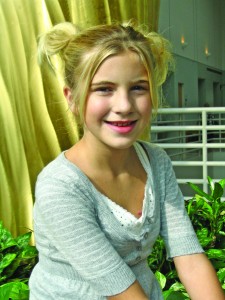 Don’t make the mistake of taking on ten-year-old Jessica Peterson in any trivia contest involving the TV show “Friends.”  She’ll smoke you. “I have every season on DVD,” the blond haired blue eyed Marionville student said. “I play (the game Scene It – Friends Edition) with my family all the time.”

In 2006, Jessica would have the opportunity to find out who her real friends were, as she would rely on the kindness of blood donors to make her feel like a kid again. The first sign that something was wrong was when Jessica’s gums were bleeding around her newly installed braces. “They were gunked-up and really gross,” she said. Jessica’s mother Carla had begun to notice that when Jessica would get a bruise, it would take longer than normal to heal. She also noticed small reddish spots on Jessica’s hands and arms. Wondering what it all meant, Carla took her daughter to the hospital to find out. Tests performed at CoxHealth South in Springfield revealed that Jessica was severely anemic. Her platelet count was very low, and her white cells wouldn’t even register. Little Jessica received a unit of platelets immediately to boost her immune system while doctors decided on a course of action.

Jessica has aplastic anemia – a condition where bone marrow does not produce sufficient new cells to replenish the blood in her body. She has received twenty-eight blood transfusions, many from CBCO donors. While it’s good that no cancer is present in her body, she has undergone a round of chemotherapy and is taking medicine to control the disease. “We have to constantly watch her,” Carla said, trying to walk the fine line between protecting her daughter and letting her be a normal young girl. “We try to make sure that she doesn’t get bruised or cut. Every time she falls down, I’m concerned. Once a month she gets a blood count. We’ve also got to watch for fever, because with her immune system any infection could be a problem.”

A bone marrow transplant is a future possibility, but for now doctors are content to watch and wait to see if her condition improves. It’s pretty scary stuff for a ten-year-old, but Jessica is taking it all in stride. To give her strength during her treatments, her family made her a purple teddy bear that contained something special. “They (her sisters and brother) put two hearts in it,” Jessica said, beaming. “I call it L.A., short for Lucky Angel.”

During her treatment, the outgoing fourth grader made a lot of new friends. She considers blood donors a part of that group. “I didn’t know what platelets were at first,” she said. “I sure do now. I want to tell blood donors thank you and that I love you.” Mom Carla agrees. “I’d say the same thing. They’re totally amazing people.” There are TV “friends” and real friends. Jessica Peterson is happy to have both.