When Dana and Bill Powers checked in to Mercy Hospital in Springfield for their son’s birth in February 2009, everything appeared to be progressing normally.

“As soon as he was born, the alarms in the room started going off,” said Bill. “The nurses came in and got him. They pulled me to come with him. Dana got to hold him for a couple of seconds. We snapped a picture and they whisked us off to the NICU.”

It would be four hours before the new parents knew anything about Seely’s condition.

“Around midnight, we finally got confirmation that he was stable,” Bill said.

The 8-lb., 6-oz. baby was suffering from anemia. He had lost blood due to a tear in the umbilical cord. In addition, his mother said there was a 25-hour time span between her water breaking and his birth, with little amniotic fluid remaining.

“He had respiratory distress,” Dana said. “He had a little bit of underdeveloped lungs, so they had to give him oxygen and put him in a little bubble. I think it was the loss of blood that threw him for a loop.”

Seely spent the first 7 days of his life at Mercy’s neonatal intensive care unit, where he received a blood transfusion from CBCO donors.

“Once he got the blood transfusion, he bounced back,” Dana said. “The doctor on call said she gave him two-thirds of his blood volume. That’s something that impacted me a lot.”

The Powers were not aware that their son was receiving a blood transfusion as it was happening, but once they knew they were thankful that blood was available.

“To not know if your child is alive or not, and then to find out a blood donor and a blood donation was probably the key medical factor involved in him recovering — I’d give the donor a hug, for sure,” he said.

The blood donation has always resonated with both of them, Dana said. “That was the turnaround with him. You can’t ever find out the person who donated, but you know someone very caring had donated something that saved his life.”

Following the blood transfusion, Seely’s condition turned around. His Apgar scores improved and he began meeting the necessary milestones for being discharged. 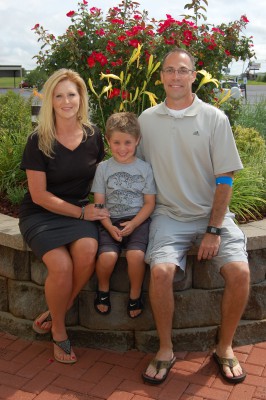 “Everything’s been great ever since,” said Bill.

Dana had donated blood before they were married, and Bill had donated once prior to Seely’s birth. The Powers now make blood donation a regular event and have expanded that dedication to make a bigger impact in the community.

The next blood drive – the school’s seventh – is scheduled for February 29, 2016. The blood drive sees an average of 41 donors.

“We started it because of Seely, but it’s special to a lot of people at our school,” Bill said, adding that a couple of teachers also have children who needed transfusions.

Seely is now a healthy, typical 6-year-old boy who understands why his parents donate blood.

“We always make sure and tell him, ‘This is what saved your life.’ We hope to instill in him that this is something we do,” Dana said.

The Powers feel that sharing their story will let people know how easy it is to donate blood and how it can touch so many other families.

Until you find yourself or a loved one in need of blood, they said, you don’t realize how important it is.

Donating blood is easy and does not take as much time as many people think, the Powers said, urging others to give blood.

“Just have faith that it is helping people live and have healthy lives,” Bill said. “Someone sacrificed one hour and it saved our son’s life. That’s the least we can do.” 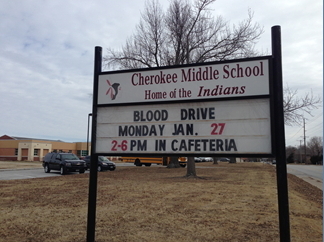 Imagine if your blood had the power to make a difference, just like someone’s blood made the difference for newborn Seely Powers. Your blood DOES have that power.

Help patients in southwest Missouri, northwest Arkansas, and southeast Kansas. Click HERE to find a blood drive or donor center near you.