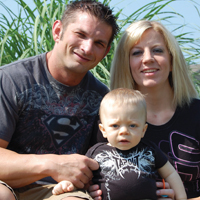 No one ever thinks that they will need blood.  At least not many do.  That’s why recruiting blood donors can be such a daunting task.

Every five minutes, an area hospital patient receives a blood transfusion, but sometimes it takes a real life experience to know what kind of an impact blood donors have on the health of the community.  Dave and Liz Lamberson made that connection just after the birth of their son Kane in April of 2010.

“Within five minutes of Kane’s birth, we thought there was a problem,” Dave recalled.  “He was very pale and was hooked up to a ventilator almost immediately.  First the doctors did an exchange transfusion that was equal to about one quarter of his total blood volume.  Then later they did a full blood exchange after fearing that he might suffer some brain damage.  Kane recovered, and we were able to take him home about 14 days later.”

The low blood counts were eventually brought under control thanks to the transfusions and some specialized physical therapy.  He still undergoes tests every other month, but his blood counts are now stable.  “Getting blood has given Kane the gift of life,” Liz exclaimed.  “Without it he wouldn’t be here.”

So what did the Lambersons do now that they had seen the amazing healing power of blood?  They became blood donors themselves.  Liz had only given one time in high school “just to get out of class,” she laughed.  “But I decided to give it another shot and I give now as often as I can.”

Dave Lamberson had never given before, but now donates on a regular schedule.  “I think people in some cases are kind of scared to give.  They don’t know the benefits that their donation has for others.  I’m trying to change the attitudes of people by giving and showing others how easy it can be.”

Once you see the power of blood, you understand and want to pass it along.  Count the Lambersons among the converted.  “We always will be forever grateful to the blood donors who gave for Kane,” Liz said.  “They have literally saved my son’s life several times over.”

« Living Life
Transformed in an instant »