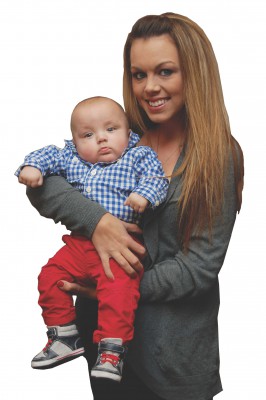 After losing one child to a rare condition — Rh Disease — Ozark, Missouri, mom Tiffany LaRose is determined not to let it take a second child from her.

In 2014, her daughter Rylee was stillborn, diagnosed with Hemolytic Disease of the Newborn which means the bone marrow was not producing new red blood cells. “She was born at 24 weeks,” said Tiffany, who was already mother to daughter Serenity and son Braxton.

June 10, 2015, Tiffany welcomed a son, Mack Hilzer, born 13 weeks prematurely. The baby received the same diagnosis as his late sister, along with Hypoproliferative Anemia. Tiffany’s two older children did not have similar health problems due to their father’s blood type not being Rh-negative.

If a woman with Rh-negative blood has a child with a man whose blood is Rh-positive, and that baby also has Rh-positive blood, the mother is at risk of becoming sensitized. This can cause the mother’s antibodies to attack the baby’s Rh-positive blood cells, leading to serious health problems or even death for the baby. This is what Tiffany experienced with both Rylee and Mack.

Learn more about this condition by clicking here to visit the website of the American College of Obstetricians and Gynecologists.

Rh Incompatibility is often prevented with an immunization – Rho(D) Immune Globulin or (RhIg), also known by the brand name RhoGAM – which blocks the mother’s body from developing the antibodies that may attack the baby’s Rh-positive blood cells. The immunization is usually given to expectant mothers during the 28th week of pregnancy, and again within 72 hours of giving birth.

While both Rylee and Mack were delivered before the 28-week landmark, the damage had already been done. Tiffany suffered a miscarriage prior to Rylee’s conception. Tiffany did not receive the RhoGAM shot at this time. This, Tiffany says, is how she became sensitized and produced the antibodies that attacked the fetus.

Educating others about Rh disease is now a passion for Tiffany, who also needed a blood transfusion after hemorrhaging during Mack’s birth. “I want to tell the story of, ‘Here is this baby and he’s sick, so here is how you can help this child. Even if your blood donation doesn’t go directly to Mack, it will go to someone,’” she said.

In addition, she is spreading the word about how a simple immunization can help other Rh-negative mothers carryin 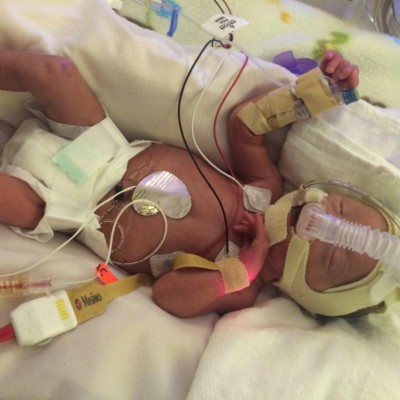 g babies with Rh-positive fathers avoid the suffering that she and her family have gone through.

Through her Facebook page, “Blood For Mack,” Tiffany brings awareness to the disease and to Mack’s struggle. Her efforts have also brought donors to CBCO to help local patients, and also encouraged blood donation at centers in other states, in honor of Mack, so that other patients may receive the gift of life.

Mack’s transfusions were necessary to provide him with the red blood cells that his bone marrow failed to produce. Thankfully, his body has started producing red blood cells and he has not needed a blood transfusion since October 7, 2015. Tiffany is optimistic that he will not need future transfusions.

To Mack’s blood donors, Tiffany says, “I owe them my son’s life. My body failed him. Something as simple as a shot not given to me caused my body to break down and break him down. If it wasn’t for the donors, he wouldn’t be here at all. We would have not a six-month-old happy baby in our arms. I would have a baby six feet under instead.”

While Mack needed blood from CBCO’s Baby Quad donors – O Negative blood type which is also tested and found to be CMV Negative – Tiffany frequently encourages people with all blood types to donate.

“It’s not just the O Negative blood that we need,” she said. “Let’s give everyone a fighting chance at life.” 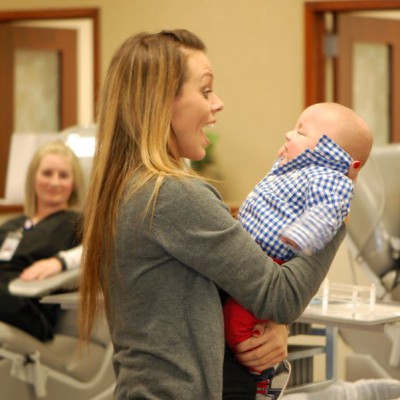 Patients like baby Mack are counting on you. Find a mobile blood drive near you, or check the hours and locations of our donor centers, by clicking HERE.