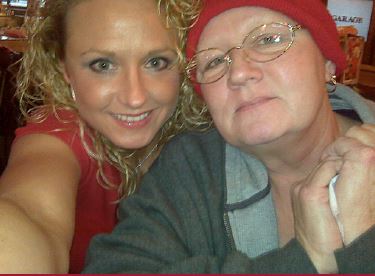 Jennifer Robertson takes a candid shot with her mother, Cathy Bird, who used blood multiple times during her fight against cancer.

When Jennifer Robertson was young, she had a good idea of what she was going to be when she grew up. “I was always pretending to doctor the animals,” she said. “I knew from a very early age that I wanted to be a nurse.” In 1996, the Stockton High School graduate did just that, obtaining her degree from the Burge School of Nursing in Springfield.
Robertson has held a number of positions during her medical career, including stints as a floor nurse and operating room nurse for Mercy Springfield.

“A transfusion provides an almost-immediate positive impact. It improves a patient’s vital signs, skin color and energy level, usually in a very short period of time. It also helps them to feel more comfortable and at ease. That’s an important aspect of their well-being.”

The power of blood would also be experienced on a personal level by Robertson as her mother fought for her own life. In 2009 Cathy Bird was diagnosed with multiple myeloma, a type of cancer where collections of abnormal plasma cells accumulate in the bone marrow and interfere with the production of normal blood cells.

Treatment involved harvesting stem cells from her own blood. “After a round of chemotherapy to kill the cancer cells, her stem cells were given back,” Robertson explained. “Several times, she received packed red cells and platelets when she became too anemic to continue her therapy. It was hard on her, but those treatments paid off, if only for a short time.”

Bird’s myeloma went into remission, which lasted about 18 months. But, as is the case with many cancer patients, the cancer returned. During the last six months of her life, Bird received blood to combat the effects of the chemotherapy and platelets to reduce the risk of bleeding. In addition, the blood helped her feel better, improving her quality of life. First, it was a couple of times per month. Then once per week. Finally, as her cancer reached the point of no return, she was transfused one final time and then went home to say goodbye to family and friends.Cathy Bird died in July of 2012 at the age of 61.

“My mother loved to garden,” Robertson said. “Every corner of our yard had flower beds, bushes, flowering trees and bird feeders. On Mother’s Day we would go to nurseries and buy what she needed for the year. She kept the birds well fed, that’s for sure.” 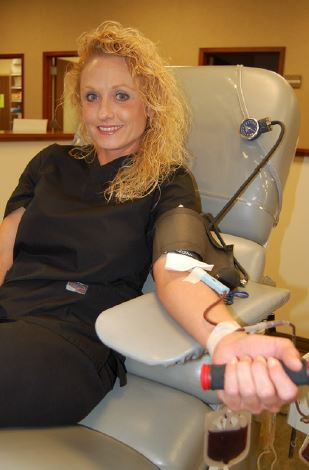 Jennifer Robertson donates blood to honor her mother, who received blood often in her fight against cancer.

Although a complete recovery was not in the cards, Jennifer Robertson and her mom carved out three additional years of memories, thanks in part to blood and platelet donors. “I remember in the hospital before the final discharge, Mom was asked if she wanted a final transfusion. She said yes. That gave her the energy to feel well enough for company. Well enough to say her goodbyes to family and friends. Blood bought her that time.”

Since her high school days, Robertson had been an off-and-on blood donor. Now she makes it a point to give her type A negative blood whenever she can, because it makes her feel closer to her mother. “It’s my goal to do what I can to replace what blood donors gave to her.”

“The blood she received made her feel better and improved her quality of life. I thank her donors for every drop, and I hope they realize my gratitude for the great things they are doing when they roll up their sleeves.”

« A Warrior’s Heart
Keeping a tally of life »