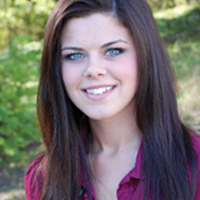 MaKayla Smith, 18, of Berryville, Ark. was living the perfect life. Studious, popular, athletic, she seemingly had it all. As she was nearing the completion of her junior year at Berryville High School, things would change suddenly one sunny afternoon.

MaKayla was joining several of her friends on a Saturday, riding ATV’s to a local swimming hole. “I had just started driving, with my boyfriend riding with me in the passenger seat,” Smith explained. “I wasn’t familiar with the road, and swerved to miss some potholes. I flipped us over.”

While MaKayla’s boyfriend was thrown clear, the ATV rolled upside down, pinning her body in the wreckage. “I don’t remember the crash itself,” she continues. “When I woke up in the vehicle, I was upside down. I could only move one arm.”

Flight paramedics were called to the scene. Smith’s injuries included a severe foot injury, a broken back and a concussion. On the flight to Springfield, Smith received what would over the next week become several units of blood. She was paralyzed from the waist down.

The date of the accident – May 21, 2011 – is significant. The next day a tornado ripped through Joplin, Mo. Many of the victims were taken to St. John’s Hospital in Springfield. MaKayla, although her injuries were serious, saw others that were wounded. Some were missing limbs. Others were near death. “At the time, I was just entering a phase of kind of pitying myself,” she said. “Seeing so many tornado victims coming in helped me to realize that I could be worse off.”

Smith was operated on two times that week. Doctors didn’t give her much of a chance to walk again. But they didn’t know about an incredible resolve that lied within the former track athlete. “I like track because it’s not really a team sport. It’s really about how far you can push yourself. I’m also very stubborn. If you say I can’t, it makes me want it even more.

MaKayla began therapy. Learning to walk again. Building muscle where previous muscles had been ripped apart. She has made miraculous strides, but there’s more work yet to come. “The therapy was more physical at first. Now I’ve kind of plateaued and it’s more of a mental thing.” Five months after the crash, she still sports a walking boot and cane. But she’s walking. Her goal is to compete this Spring. She vows to run track again before the school year is out.

The accident has shown MaKayla the importance of life and has rekindled her faith in God. It has also given her a new appreciation for blood donors. She has donated twice before at Berryville High School, and she remembered wondering in the hospital if the blood she was receiving could be her own. She plans to donate again and will always urge others to do the same. Her reasoning is simple. “If people hadn’t donated when they did, I would probably be dead. Now if I give, maybe it will save someone else’s life. To my blood donors, thank you. A lot.”

« Once you get started, It’s really pretty easy
A picture of perseverance »