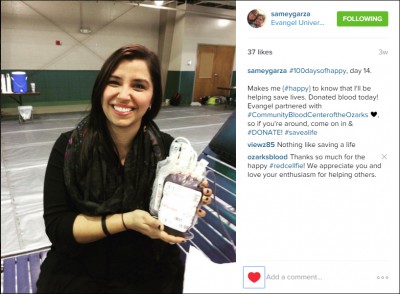 Universal blood donor Samantha Garza encourages others to donate blood by sharing photos on her Instagram account when she donates at work.

Samantha Garza, of Springfield, Missouri, vividly remembers the day she became a blood donor. It was 2010 and she was attending college out of state. She learned that her O Negative blood was the universal blood type, with the ability to help anyone with any blood type.

“I had this feeling that, even though I would probably never meet the people I was helping save with my blood, I knew I was making a difference in someone’s life,” she said. “That was all that mattered. Ever since then, I decided to donate as many times as possible.”

A move to Missouri and accepting a position with the national office of the Assemblies of God led to Samantha becoming a donor with Community Blood Center of the Ozarks. “Every few months, they would host a blood drive, and I’d be sure to sign up.”

Samantha meets that responsibility by being consistent with her donations, rather than donating once each year. She has now been a part of 10 blood drives with CBCO, most recently in October when her new employer, Evangel University, held a blood drive with our popular new “Star Wars” theme.

Why Samantha continues to donate with CBCO

“There really are no words to express how thankful I am, that through such a small act as donating blood, I could potentially save hundreds of lives,” she said. “That reason alone will always be enough for me to continue donating, as often as possible.”

Samantha also appreciates her fellow universal donors. While she has never needed to receive blood, she said, “I’m glad to know that there are others out there who donate, so that when I would happen to need some, there would be some for me.”

For fellow donors, and for those who have not yet tried giving blood, Samantha has a message.

“Donate!” she said with a smile. “How can someone not want to spend a few minutes of their time, to save someone’s entire life? I say it’s totally worth it. I encourage you today, to think of those who may someday need blood. Don’t be selfish. Share!”

In October, Samantha redeemed her LifePoints rewards for the first time, choosing a $25 Visa gift card.

“I find the program pretty awesome! Although, I must say, that I would definitely still donate even if there were no such program,” she said. “It’s just nice to be treated every now and then.”

Samantha confessed that she tends to forget about most rewards programs. “But the awesome blood center employees wonderfully remind me about LifePoints every time I donate,” she said.

What keeps Samantha excited about rolling up her sleeve to donate?

“I may not be a doctor or know what to do in an emergency, but knowing that my blood is available to assist the doctors in doing what is needed to keep someone alive — that makes me happy!”

You might have enough LifePoints to redeem. Check your balance by logging in to CBCO’s donor portal by clicking HERE. You’ll see how many points you have and your options for redemption.

Are you a universal donor? We would love to hear about your reason for donating blood. Click HERE to tell us in the comments on Facebook.